Make the Switch - cut 5g of salt a day

With the global effort to reduce salt consumption and reduce stroke kicking off today with Salt Awareness Week, The George Institute for Global Health is helping consumers with specific advice on how to reduce their daily intake of salt, particularly from processed foods. By highlighting examples of foods that are commonly consumed by Australians, it is easy to see how consumers can make lower salt food choices and can easily “make the switch”.

“The average Australian consumes double the amount of salt recommended for good health, increasing their risk of high blood pressure, heart attack and stroke. But "Making the Switch" to lower salt choices is easier than many people realise. Our "Make the Switch" meal plan shows how easy it is to make small changes every day that can really drive salt intake down to healthy levels,” said Dr Bruce Neal, Senior Director at The George Institute and Chairman of the Australian Division of World Action on Salt and Health (AWASH). "If you like your chicken parma, you can have your chicken parma – just a less salty one! Meal by meal, gram by gram. "Making the Switch‟ can save lives.”

The average Australian consumes 9 grams of salt a day. That's far above the Australian government's recommended upper limit of 6 grams a day and the World Health Organization recommendation of 5 grams. Processed foods account for around 75% of daily salt intake in Australia. Because the levels of salt can vary greatly between different brands of very similar food products, it is possible for consumers to reduce their salt intake at every meal simply by making the switch to lower salt brands.

“Stroke is the second leading cause of death in Australia and a major cause of death and disability. By raising awareness of the dangers of high salt consumption we hope to reduce the incidence of stroke. Making the switch is easy and it may save your life,” Dr Lalor said.

The George Institute has created SaltSwitch to put the power of switching into the hands of the consumer. Join 450,000 other Australians by downloading the FoodSwitch smartphone application and turning on the SaltSwitch filter. Targeted at Australia's four million people with hypertension, SaltSwitch gives consumers specific suggestions about alternative foods that are lower in salt. Just scan the barcode and see the healthier recommendations.

FoodSwitch is available on iOS and Android smartphones, and can be downloaded for free on the Australian Apple iTunes and Google Play stores, or via the app store on their device. 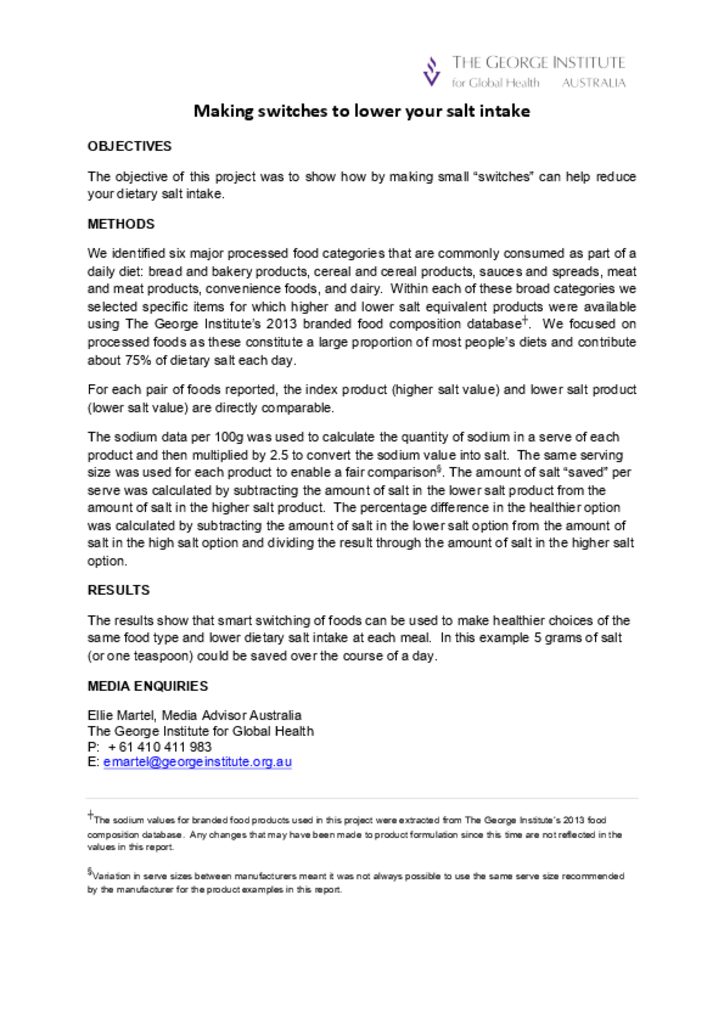