SYDNEY MARCH 11 - While Australians may think veggie savoury snacks are healthier options, new research shows some products are hiding alarming amounts of salt that could be damaging their health. What's more, supermarket shoppers should treat the marketing claims on these products with caution as the highest and lowest veggie snacks both claimed to be 'lightly salted’.

A new report into savoury snacks released by The George Institute for Global Health, VicHealth and the Heart Foundation revealed the saltiest product was a veg-based kale chip containing a whopping 7.8 grams of salt per 100g. The kale chip was 26 times saltier than the lowest product, a lightly salted sweet potato chip (0.3g salt per 100g).

“Don’t let the marketing health halo that surrounds these veg and legume-based savoury snacks mislead you. You’re much better off having some colourful fresh veggie sticks, a piece of fruit or a handful of unsalted nuts than a packet of salty veggie or lentil chips to curb that afternoon craving,” Ms Armstrong said.

Heart Foundation CEO Victoria, Kellie-Ann Jolly, said eating too much salt can cause high blood pressure, which can lead to a heart attack, stroke and kidney disease.

“Nearly 50 per cent of heart disease deaths in Australia are attributable to high blood pressure. Yet Australians, on average, eat nearly double the recommended maximum daily salt intake. We should be eating less than a teaspoon a day, or 5 grams, while children need even less – around half a level teaspoon a day,” Ms Jolly said.

The report analysed the salt content in more than 1500 savoury snacks products found in major Australian supermarkets between 2013 to 2019.

The George Institute’s Senior Public Health Nutritionist and report lead author, Clare Farrand, said the salt content in veg-based snack products has increased by 68 per cent since 2013, while other savoury snack categories saw a 14 per cent decrease where salt targets had been set by government.

“Salt targets work. It is increasingly important that food manufacturers have salt targets to work towards, particularly as so many new products are coming on to the market. As we saw from our research, many manufacturers can and are already producing some products with much less salt; targets will motivate all manufacturers to do so, and level the playing field,” Ms Farrand said.

“We are pleased to see the Healthy Food Partnership through the Federal Government have recently endorsed the first wave of salt targets, with a second expected to follow mid-2020. If Australia is to meet its commitment to a 30 per cent reduction in the average population salt intake by 2025, these targets need to be implemented, with time bound commitments, and monitored to ensure food companies achieve them.”

VicHealth Chief Executive Officer Dr Sandro Demaio, said the report revealed the claims of so-called healthy chips don’t stack up.
“There’s a lot of greenwashing and health washing that goes on with these products to convince us to buy them. Just because a product is labelled as organic, gluten-free or it sits in the health food aisle doesn’t mean it’s actually good for us,” Dr Demaio said.
“A packet of kale or lentil chips might seem like a good option – particularly if parents are looking for a healthy snack for their kids – but they could be packed with salt.
“Around 75 per cent of the salt we eat is hidden in unhealthy processed and packaged foods.  Manufacturers need to ‘shake off the salt’ and take responsibility for producing lower salt products that don’t hurt our health.”

• Snacking on fresh food like fruits and vegetables is always best. Try roasting your own chickpeas, kale or thinly slice vegies like carrots or sweet potatoes with herbs and spices for a savoury, crunchy snack.

• Serving sizes vary greatly – be aware you could be consuming more salt than you realise.

• Download the FoodSwitch app to scan product barcodes to find an alternative product with a lower sodium content. There’s even a SaltSwitch filter to focus on products lower in salt.

• Visit www.unpackthesalt.com.au for tips and resources on how to identify salt in packaged foods and reduce your salt intake.

About the Victorian Salt Reduction Partnership

The Victorian Salt Reduction Partnership was established in 2014 in response to alarmingly high levels of salt consumption by the Victorian public. The partnership comprises peak public health organisations: VicHealth, Heart Foundation, The George Institute for Global Health, Deakin University Institute for Physical Activity and Nutrition (IPAN), National Stroke Foundation, Kidney Health Australia, The Victorian Department for Health and Human Services, Baker Heart and Diabetes Institute, Food Innovation Australia Ltd, CSIRO and the High Blood Pressure Research Council. Australia is committed to meeting the World Health Organization’s target of a 30 per cent reduction in average population salt intake by 2025. To achieve this, the partnership has developed a comprehensive set of actions aimed at gaining consensus and commitment for salt reduction action from governments, public and industry in Victoria.

“Don’t let the marketing health halo that surrounds these veg and legume-based savoury snacks mislead you. You’re much better off having some colourful fresh veggie sticks, a piece of fruit or a handful of unsalted nuts than a packet of salty veggie or lentil chips to curb that afternoon craving,” 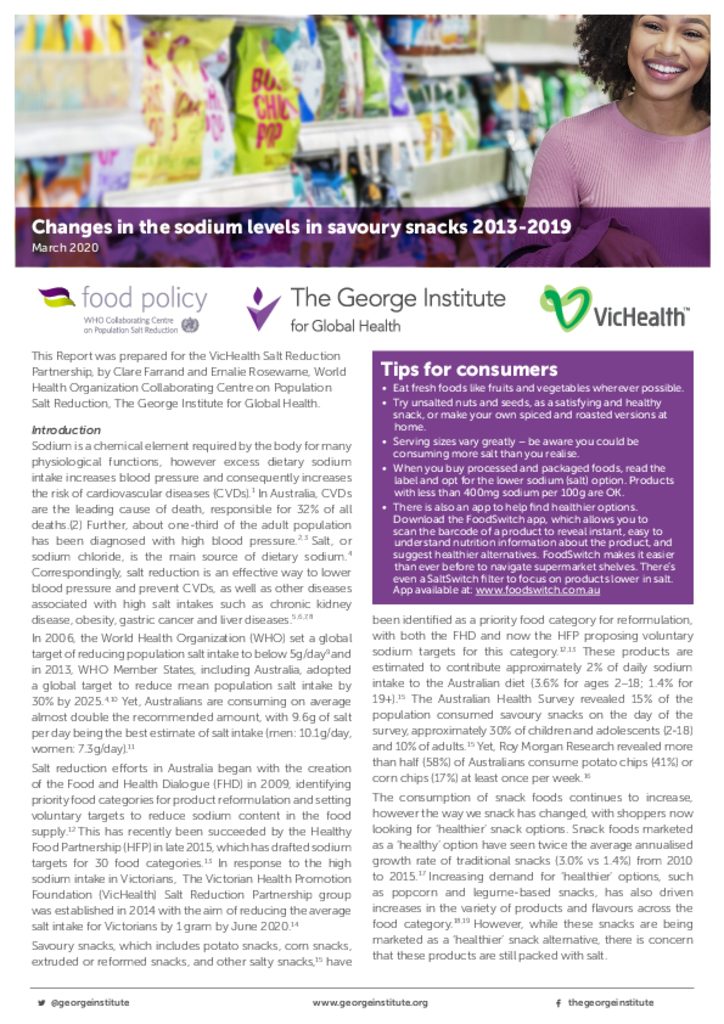 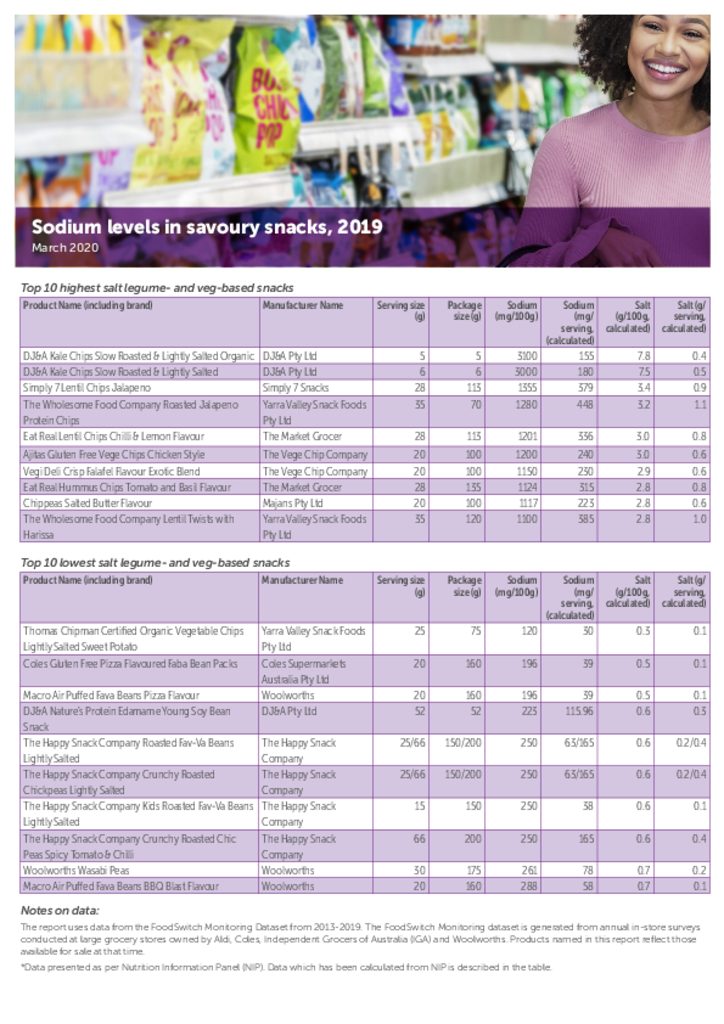