China’s past progress in healthcare and future opportunities can help not only the Chinese people live better and longer lives, but can also drive global advancements in healthcare delivery, said Josette Sheeran, President and CEO of the Asia Society, in a major speech in Beijing hosted by The George Institute for Global Health.

Sheeran delivered the John Yu Oration before an audience of business leaders, diplomats, academics and policymakers, where she was awarded the John Yu Medal for her leadership and commitment to improving people’s health.

“We’re proud we can honour a global leader like Josette Sheeran who has done so much to combat famine and malnutrition,” said Professor Robyn Norton, Principal Director of The George Institute.  “As the former head of the World Food Programme, Josette literally helped feed and keep alive hundreds of millions of people around the world.”

“I am deeply honoured to be the recipient of this year’s John Yu Award,” Sheeran said after the Oration. “The health challenges before us require wisdom and innovation only achievable through partnership across sectors and nations. I count myself privileged to have had the opportunity to serve on the frontline of hunger and malnutrition, which are unequivocally winnable battles of our time."

During the oration, Sheeran invited the audience to take a moment and appreciate the enormity of the fact that “since the 1970s, China has lifted 600 million of its citizens out of poverty—one tenth of humanity—and more than all of human history combined."

Given the rise of chronic and non-communicable diseases such as obesity and cardiovascular diseases, Sheeran remarked that, "We must also shift the discussion from health as a 'cost' to governments, to society, to families and individuals – to an 'investment' with a powerful return on investment … We need to move the hearts and minds of presidents, prime ministers and finance ministers as much as the health ministers. We need to find the champions and pace setters in provincial governors and mayors of large cities around the world."

Recognising China’s remarkable experience in reducing hunger through steadfast political will, reform of the economic system, substantial investment in both human and technical capacity, Sheeran said in closing that, "We could be standing in no more exciting place for this vision of a world without abject poverty, hunger and wracked with disease than in China."

The John Yu Oration is an annual flagship event in The George Institute’s ongoing engagement with key stakeholders, government and non-government organisations to improve the lives of millions of people worldwide. 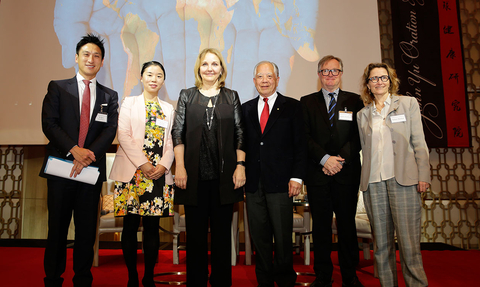