Tuesday 8 March is International Women’s Day, a day to celebrate the social, economic, cultural and political achievement of women around the world, but also to highlight how much there is still to do in many countries in the pursuit of gender parity.

In addition to research and advocacy for women’s health, The George Institute is dedicated to being a workplace that fosters women’s contribution to health and medical research. In 2015 we joined the Science in Australia Gender Equity (SAGE) pilot, an initiative in Australia involving 24 universities, five medical research institutes and two public research agencies to address gender equity in the STEMM (Science, Technology, Engineering, Mathematics and Medicine) field. We are also majority female, with 67% of our staff across our Australia, China, India and UK offices being women.

“This is significant for any organisation,” says Human Resources Manager Lynne Worlock, “but as always there is still room for us to improve when it comes to gender representation in management and senior positions, so we’re in pursuit of parity ourselves.” 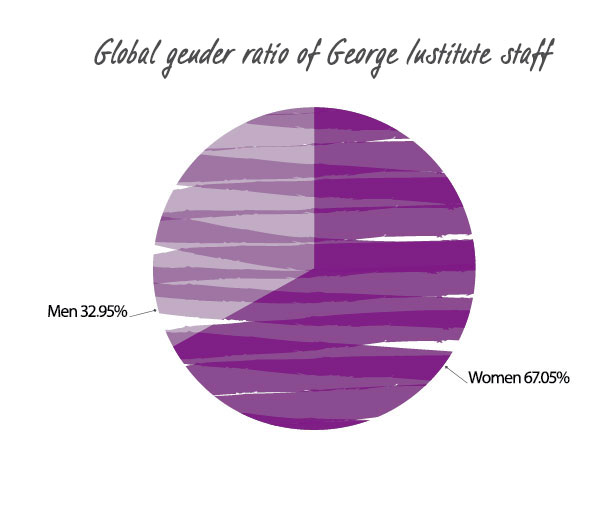 One such senior female staff member is Dr Parisa Glass, Business Manager of the George Institute Australia and Deputy Director of our Critical Care and Trauma Division. She has a PhD in Biomedical Science and an MBA.

Dr Glass came to Australia as a refugee when she was a teenager. “I escaped my country in my teens with the dream of one day going to university as this was and still is denied to me and others from my background. I knew I had no voice being a woman and belonging to a minority group. So International Women’s Day means a great deal to me,” she says.

“As reported in the Australian Financial Review recently, more than half of science PhDs in Australia are achieved by women, and about half of our early career scientists and researchers are female. But there is a significant attrition in the proportion of these women who move up the career ladder to senior positions. This is a loss of talent to those fields and to the country, which is why gender parity is so important to everyone."