SYDNEY, SEPT 2 - Woolworths is winning the supermarket war when it comes to the healthiest home brands, according to FoodSwitch: The State of the Food Supply, but the new report shows there’s a lot more work to be done to help stem the tide of diet-related disease in Australia.

The George Institute for Global Health’s annual snapshot of the nation’s packaged food supply found that when it comes to the big four supermarkets, Woolworths brands still had the highest overall healthiness rating with Coles ranked second, ALDI third, and IGA coming in as least healthy.

George Institute researchers used the government-developed Health Star Rating (HSR) criteria to rank just under 22,000 packaged food and beverage items being sold across Australia. The major supermarkets – whose own label brands can account for around a third of all products in store - were among 31 manufacturers included in the analysis, along with household names Heinz, Nestle and Campbell Arnott’s.

The research found that only around two in five products in the IGA and ALDI own brand ranges could be considered healthy, i.e. having an HSR of 3.5 and above. Just over half of Coles’ and 59 percent of Woolworths’ products met this standard.

The researchers also looked at the proportion of packaged food and drinks that were classed as ‘ultra-processed.’ These products are often packed with industrially produced ingredients like artificial sweeteners, hydrolysed proteins, hydrogenated oils and emulsifiers, and are linked to weight gain, cardiovascular disease and death.

ALDI’s range had the highest proportion of ultra-processed products, with two thirds of its own brands falling into this category compared to just under two thirds for IGA and Coles, and 57 percent of Woolworths products.

George Institute Accredited Practising Dietitian Daisy Coyle said that with most Australian households buying their food from the major supermarkets, these outlets had the power to positively influence the food supply and improve health for all Australians.

“Sadly, we’ve seen little to no improvement in the healthiness of the big four’s own brand ranges in the twelve months since we last conducted this analysis and we know they have the capability to do so much more,” she said.

In this year’s report, researchers also looked at the proportion of products that met the Government’s recently announced Healthy Food Partnership targets for the harmful nutrients, sodium and saturated fat.

Woolworths again topped the supermarket own brands with just over two thirds of their products meeting the sodium target, Coles came in second with 56 percent, and just under half of ALDI and IGA products met this target.

The saltiest offender was Goodman Fielder - whose product range includes Helga’s, and Meadow Lea. Only just under a quarter of its products met the sodium target.

For saturated fat, three quarters of Coles own brand products met the target, followed by two thirds of Woolworths products and half of ALDI products. After the main supermarkets, McCain – known for convenience foods - had the most products in the categories covered by the target, but almost two thirds failed to meet it.

Daisy said that the release of reformulation targets in Australia was an important step in trying to reduce the amount of sodium and saturated fat in packaged foods.

“We welcome targets, but these are not likely to have much of an impact when so many products are already meeting them. They need to be stronger and include more product categories to make any real difference to people’s health,” she said.

Australia is ranked number seven in the global obesity stakes, with about two thirds of adults and one quarter of our children being above a healthy weight. Obesity already makes us vulnerable to cancer, heart disease and type 2 diabetes, which are leading killers globally and in Australia.

As the world grapples with the challenges of COVID-19, it has now also emerged that living with excess weight increases risk of more serious illness or death from the virus.

“Actions that improve the quality of the Australian food supply have the potential to reduce overweight, obesity and premature death and disability amongst millions of Australians. And they have never been more urgent,” Daisy added.

Sign up below to receive the FoodSwitch State of the Food Supply full report in your inbox:

Actions that improve the quality of the Australian food supply have the potential to reduce overweight, obesity and premature death and disability amongst millions of Australians. And they have never been more urgent! 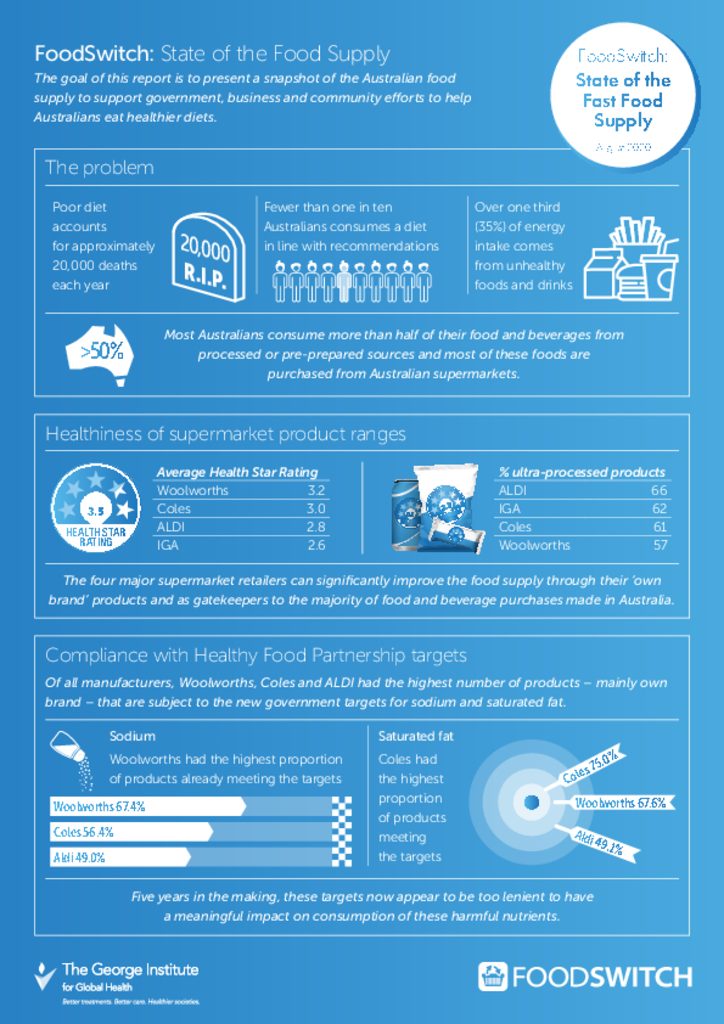