Health Star Ratings should be extended to cover fast food restaurants across Australia, according to a new report by The George Institute for Global Health.

Researchers analysed more than 1500 products from 13 leading chains, including Gloria Jean’s, Pizza Hut and McDonald’s, to find out if the food labelling system could be applied to fast food items.

Results published in the journal Appetite revealed the average HSR for fast foods was low at 2.5. Subway and Oporto performed the best with an average HSR of 3.4 across their menus. The worst performing chain was Gloria Jean’s which had the lowest average HSR (2.0 stars) followed by McCafé (2.1 stars) and Muffin Break (2.2 stars).

Dr Elizabeth Dunford, of The George Institute for Global Health, said extending the HSR to fast food restaurants would help Australians make healthier food choices. “We already have kilojoule labelling in large chain restaurants across much of Australia but that only tells consumers about energy content. Health Star Ratings on the other hand assess the full nutritional make up of a product, which is much more important health wise.

“We also know that many consumers still struggle with using the kilojoule labelling, whereas the HSR performs really well in terms of consumer understanding.

"Exactly as for packaged foods, what we found is that even in the worst performing chains, there are healthier alternatives, and the HSR would make them identifiable at a glance if it was required on the menu board.”

The HSR system was introduced in 2014 for use on supermarket foods, rating them from 0.5 to 5 stars based on the kJ, saturated fat, sugar, sodium, protein, fibre and fruit and vegetable content. Applying the same system to fast foods, The George Institute and Cancer Council NSW study found 42 per cent of all products assigned 0.5 star ratings came from Muffin Break alone – including its affogato drink, Anzac biscuit and chocolate mousse cake.

Unsurprisingly, desserts performed badly across the board with an average 0.5 star rating. The results also revealed that cafe style chains had lower average HSRs than burger and pizza chains.  With chicken and sandwich chains faring the best.

Dr Dunford added: “When you look at the range of foods in the likes of Muffin Break, McCafé and Gloria Jean’s there are a huge amount of energy dense desserts and sugary drinks. Some of the cakes on sale contained in just one serve close to half the energy intake the average Australian needs in a day.1 “Consumers aren’t stupid, they know cakes aren’t healthy. But having a half star staring down at them might help hammer the point home.” 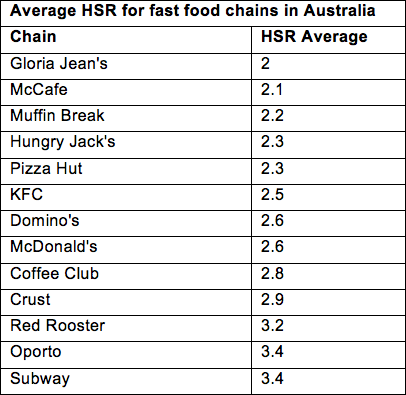 Co-author Professor Bruce Neal of the Food Policy Division at The George Institute, said: “It makes sense to have one labelling system supporting Australian’s food choices. While we hear lots about the problems with the HSR it’s actually a pretty good system. It gets it right most of the time and consumers like it.  We need to work to improve it, not trash it.

“Dietary guidelines have been around for decades and however well-meaning they’re not working. The eating habits of Australians are continuing to decline and obesity levels are on the rise. The HSR, on the other hand, gives consumers a really simple tool that can help them see instantly what’s healthy and what’s not.

‘‘The fast food industry has one of the best-funded and least regulated advertising programs in the world. We now have a way to combat the junk end of the fast food market, and we need to leap on the opportunity. I doubt there is much that would dismay the junk food industry more, than to be required to put health star ratings on all its products.’’

“We know that 1 in 3 cases of cancer in Australia are preventable. Evidence shows that being overweight or obese significantly increases your risk of 11 different types of cancer, with nearly 4,000 cancer cases caused by obesity each year in Australia. These findings show that it’s never been more important for Australians to have one food labelling system to help them quickly and easily identify healthier choices."

Read the journal article in Appetite.