New research has revealed the hidden toll that fast food kids’ meals can have on young children’s health. Some meals aimed at kids contain more than an entire day’s maximum recommended salt intake.

Most disturbing, the salt content of fast foods like chicken nuggets in Australia can be more than twice as salty as similar meals in the UK.

A new report from The George Institute for Global Health, VicHealth and the Heart Foundation analysed the salt content in kids’ meals from four major fast food outlets (Hungry Jack’s, KFC, McDonald’s and Subway) as part of a global push to reduce the salt content in children’s food during World Salt Awareness Week.

Subway Kids’ Paks were the least salty meal options, providing mini subs and purees rather than burgers with chips. All of their meals were found to be in the top five lowest salt kids’ meal options and contained one gram of salt or less per meal.

Meals with fries were among the saltiest options. McDonalds was the only chain that provided apple slices, yoghurt and cherry tomatoes as an option, instead of fries.

Heart Foundation dietitian Sian Armstrong said while none of the popular meals are healthy options, it was concerning to see some kids’ meals containing more than an entire day’s worth of salt.

“An alarming 80 per cent of Aussie kids are eating too much salt with most of it coming from processed food and fast food takeaways,” Ms Armstrong said.

“Consuming excess salt can lead to high blood pressure, a major risk for heart attack, stroke and kidney disease. Studies suggest that children with elevated blood pressure may go onto suffer it as adults.

“Most parents know that fast food isn’t a healthy option for their kids, however they may not realise that a single kids’ meal could blow out an entire day’s salt intake.

“This research shows fast food doesn’t have to be this salty. There is no reason why chicken nuggets at KFC and Hungry Jack’s should be almost twice as salty as the chicken nuggets from McDonald’s. The same goes for fries. Fast food outlets can and must reduce the salt content of their meals.”

The George Institute’s Public Health Nutritionist and the report’s lead author Clare Farrand said it was clear there needed to be more regulation on fast food outlets to make their products healthier.

“It is unacceptable that some children’s meals in Australia are significantly saltier than similar meals purchased in the UK,” Ms Farrand said.

"The fact that some companies produce the same foods with a lot less salt in the UK demonstrates that they can, and should for all countries.”

“We know that some companies are doing better than others – all of the Subway kids’ meals meet the UK targets – but clearly more needs to be done to reduce the salt content across the board.”

VicHealth dietitian Jenny Reimers said when it comes to kids’ meals it was time for fast food outlets to make the default choice the healthier option.

“Fast food really should be occasional treats, yet the average family has takeaway almost once a week. If you’re going to have takeaway foods, try less salty options with fresh fruit and vegetables included.

“While it’s encouraging that some fast food outlets are including fresh fruit and vegies as options in their kids’ meals this should be the default and it should be offered at all restaurants.” 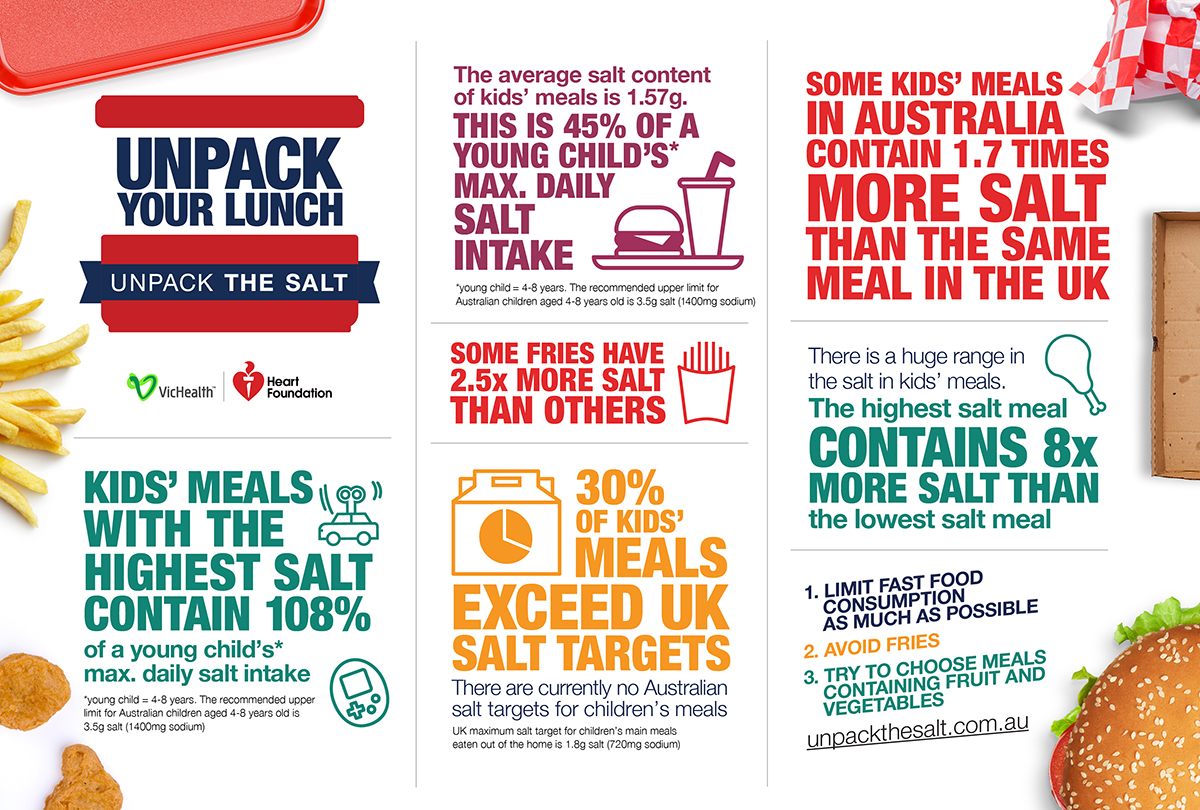 About the Victorian Salt Reduction Partnership

The Victorian Salt Reduction Partnership was established in 2014 in response to alarming high levels of salt consumption by the Victorian public. The partnership comprises of peak public health organisations: VicHealth, Heart Foundation, The George Institute for Global Health, Deakin University Institute for Physical Activity and Nutrition (IPAN), National Stroke Foundation, Kidney Health Australia, The Victorian Department for Health and Human Services, Baker Heart and Diabetes Institute, Food Innovation Australia Ltd, CSIRO and the High Blood Pressure Research Council. Australia is committed to meeting the World Health Organization’s target of 30 percent reduction in average population salt intake by 2025. To achieve this, the partnership has developed a comprehensive set of actions aimed at gaining consensus and commitment for salt reduction action from governments, public and industry in Victoria. 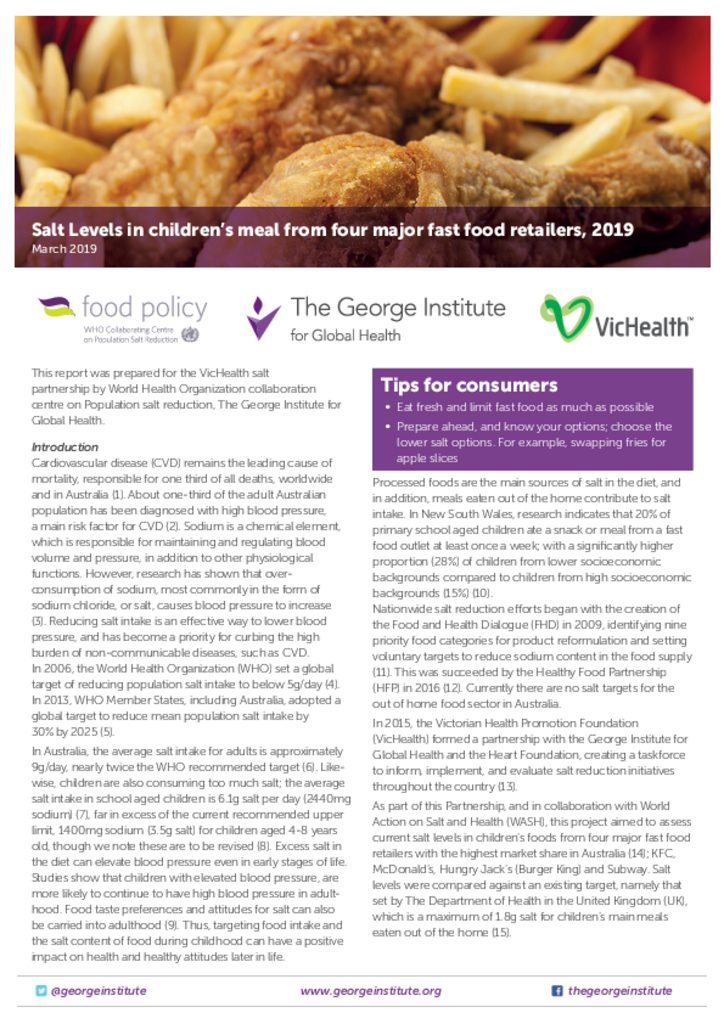